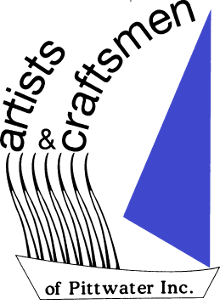 A brief history of ACOP
ACOP was formed in 1967 as "Arts and Crafts" and we've been holding our exhibitions (mostly in Mona Vale) ever since then. The name was changed to Artists and Craftsmen of Pittwater in 1974, and we became an incorporated association in 1993.

Our objects are to bring together men and women who practice arts and crafts of a high standard, and to promote opportunities for the appreciation of members’ work by the public.

ACOP endeavours to maintain a high standard of craftsmanship, involving the submission of prospective members’ work to a selection committee.

What we do
Our main activity has always been our exhibitions, held three or four times a year, almost always in Mona Vale Memorial Hall.  According to its foundation stone, the hall was opened in November 1966, so we've been there for almost its entire history.  The hall has been refurbished once - the glass doors were added as part of the library redevelopment, which was completed in 2005.

Recent changes
In November 2014, we held our first Christmas exhibition in recent times, with thanks to Pittwater Council for organising a weekend during school term when we could have the Mona Vale hall. This proved popular, and so we're now doing it every year, with a range of special Christmas craft on display.

For our Winter 2015 exhibition, we introduced a Collectables section, for our members who are also collectors, to display and sell items from their collections. This has proved so popular that it is now permanent.

Our history in pictures
Unfortunately, most of our own history records have been lost over the years.  We do have pictures of two earlier exhibitions, which were archived by the local studies librarians at Mona Vale Library.  Our thanks go to them for saving our history, and for permission to reproduce the pictures here.

Spring Exhibition 1972
These 21 photos were taken on 4th September 1972, before we changed our name from Arts & Crafts to Artists & Craftsmen of Pittwater.  The exhibition was held in Mona Vale Memorial Hall, and the photos are archived in the Pittwater Image Library.

25th Anniversary Exhibition 1992
These 6 monochrome photos were taken on 4th September 1992 at the anniversary exhibition in Mona Vale Memorial Hall, and feature then Pittwater Mayor Eric Green.  These photos are also archived in the Pittwater Image Library.

Our website
We believe that our website was first set up some time between 2010 and 2012, by Internet Resident, and our thanks to Brett for the excellent job that he did.  Unfortunately, although Brett designed it to be updated as members produced new work and as our membership changed, this never happened, because we had nobody sufficiently technical to do it.  The current website dates from 2014, and is done on a volunteer basis by Dave M (you can click on that link to see how he updated the old site).

We now use a colour scheme that's based on the colours of Pittwater - our blue/green ocean, the different blue of Pittwater itself, our clear skies, and our clean sand.  Our other website credits go to Giles Hodgers for the sand background texture, Artem Polikarpov for the gallery display software Fotorama, our website authoring software CMS Made Simple and our all-Australian web host Zuver.